You will paint a picture of your choice by following step-by-step instructions from a professional artist. Through the creation of your masterpiece you will also familiarize with different painting techniques. Our themes are customizable, and we would like to encourage you to give your personal touch to your painting. You will paint mostly with acrylics on canvas. All materials provided.

Join our most popular paint & sip event! It is an ideal going-out activity after a busy day. The lenght and themes of this event are tuned to offer a perfect balance of relaxation, challenge and amusement. A welcome drink to spice up your evening is on the house.
The max. number of participants is limited to 12, therefore you will have your individual painting set and plenty of space to move around.

An artwork can be understood by contemplating it, but recreating it opens up completely different perception. We have picked some of the greatest pieces of art history; use them as an inspiration and create your own version of the old Maestros! The max number of participants is limited to 12, therefore you will have your individual painting set and plenty of space to move around. Be our guest for a welcome drink!

Painting landscape with oil and sipping by the river, or having an event in a fancy cocktailbar, where tickets include signature cocktails, or painting in an urban garden, while pizza is being freshly baked, or having a session during Sunday brunch, spiced up with mimosas, croissants and coffee. And we have tons of more ideas, these were just examples to define “SPECIAL”…

‘Day of the Dead‘ Celebration at PIE

Sugar skulls are colorful traditional pieces of Southern Mexican art. They often appear around the Day of the Dead holiday, which coincides with Halloween. A sugar skull features a human skull shape that is decorated with vibrant flowers, swirls, diamonds and other designs. The sugar skull is a symbol to welcome the friendly spirits.

The unmissable Mezcal ( Mexican smoked Tequila ), a bowl of punch, candles and a Halloween playlist is what you can expect on the spookiest night of the year.

Yeah, I need one in my bedroom
Previous
Next

Stepping out into a vast bed of snow is like venturing into the freezing sea, walking through it and forging your own path, however, is a measure of stronger willpower. If you know the lay of the land, then everything will be alright, if not, you might be in for a deeper surprise... It goes without saying, that if you know by heart the footpaths walked by generations and the way the land flows intimately, then navigating the covered terrain will be far easier, than to step blindly as a stranger on the first outing.

‘Paint your own pet!‘

Swiss visual artist Alexandra Mia Monkewitz will guide you step-by-step to realise a beginner friendly acrylic portrait of your pet. How? After booking this event, you will be asked to send up to 5 photos of your pet (or any animal you’d like to paint) via e-mail. Alexandra will choose one with the best composition for your painting and she’ll also prepare a drawing template what you’ll transfer onto the canvas with carbon paper. After just 3 hours you can walk off delightedly with a self-made portrait of your animal friend.

La Belle Époque (French for "Beautiful Epoch") is the term often given to a period of French and European history, usually dated to between 1871–80 and the outbreak of World War I in 1914. Occurring during the era of the Third French Republic, it was a period characterised by optimism, regional peace, economic prosperity, colonial expansion, and technological, scientific, and cultural innovations. In this era of France’s cultural and artistic climate (particularly within Paris), the arts markedly flourished, with numerous masterpieces of literature, music, theatre, and visual art gaining extensive recognition.

The Kiss is Klimt's most popular work and visitors flock annually to see it in Vienna's Austrian Gallery. At a remarkable 180cm x 180cm, its powerful presence resounds from the wall as the life-size figures, wrapped in gold, embrace.

Rousseau and his Parisian contemporaries were fascinated by wandering gypsies, the Romany people known in France as bohémiens: men and women exiled to the fringes of society during the dramatic changes of the mid-nineteenth century. French writers and artists had historically linked the Romany to Egypt as well as Bohemia, which may explain Rousseau’s depiction of a dark-skinned woman sleeping calmly—despite the large lion sniffing at her shoulder—in an arid landscape.

Become a member of
a colorful community

I'll take you there 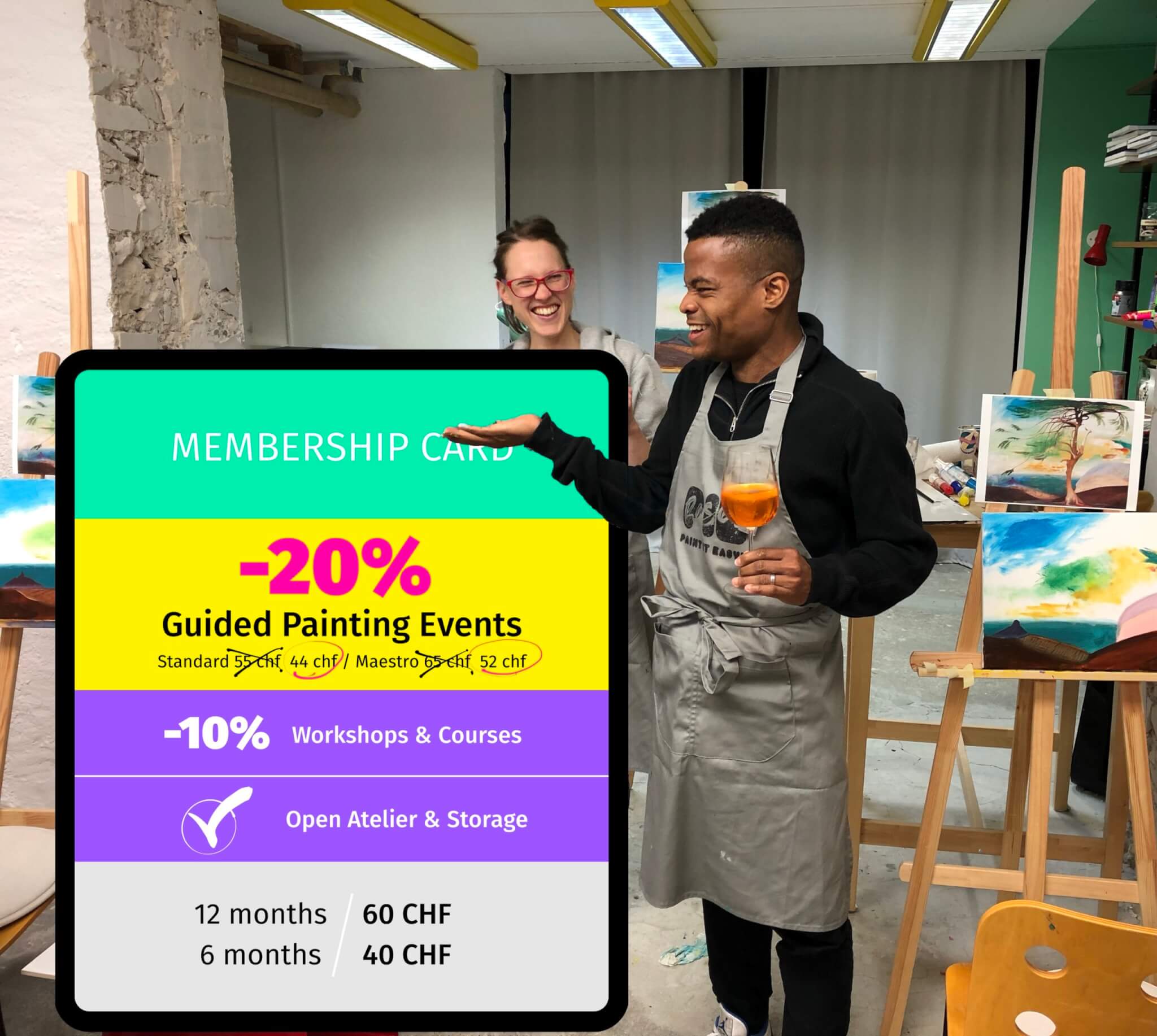 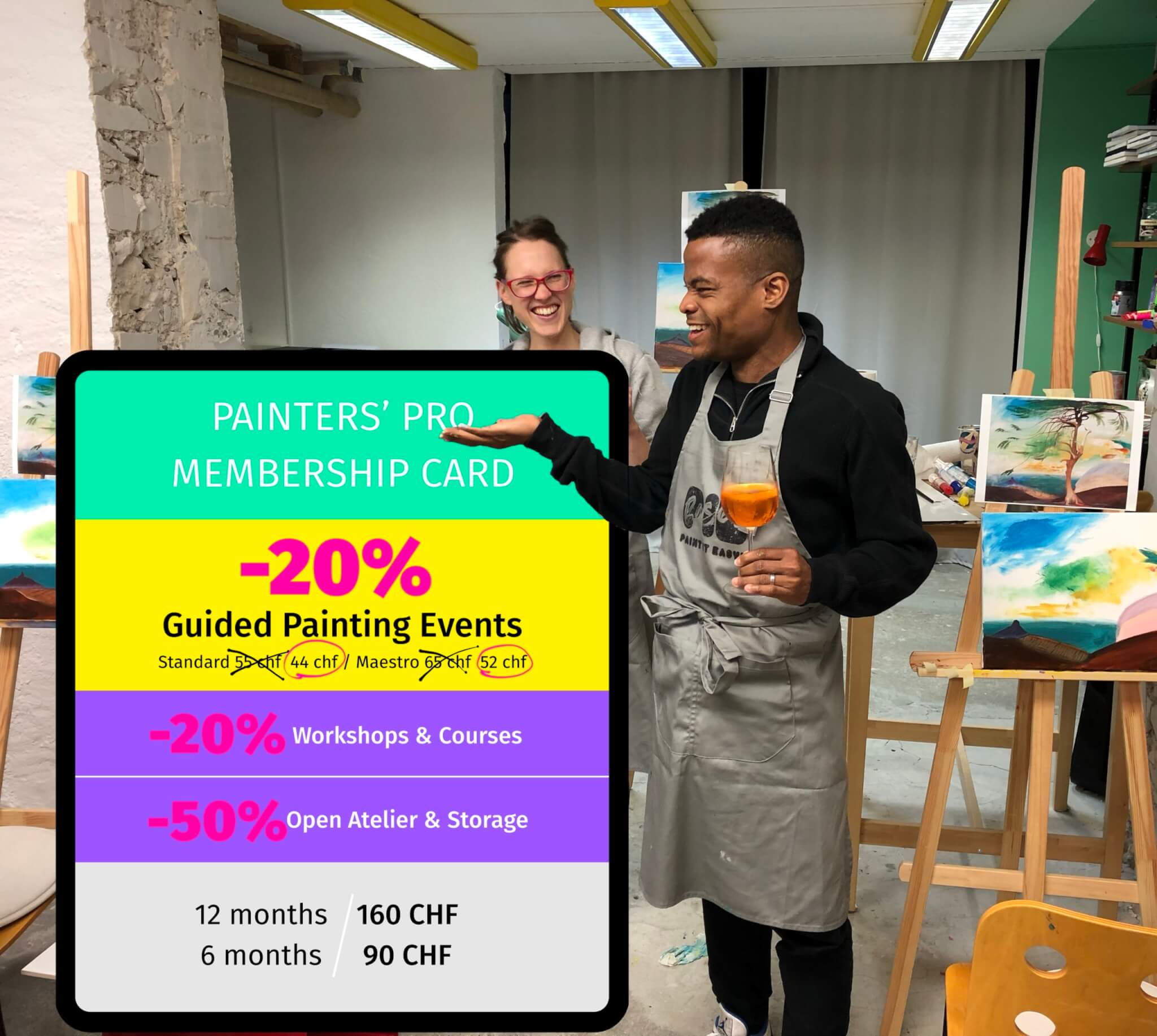 "First I was a bit insecure, because I never showed any talent in painting. But Pati showed everything step by step and made it possible that I felt comfortable, to develop my own "interpretation" of the picture."​

Fränzi
"Kids didn’t believe I painted this and made me hang it on the wall in the living room!! I would never have believed it could be so much fun to create something I'm really proud of ... and I learned a lot in the process."

Debra
"Great experience. I can hardly believe what we were able to produce in 3 hours. Thoroughly recommend it as a fun and exciting experience, resulting in something really worthwhile to take home."

William
"Best activity I have done in Basel. Never thought I could paint anything so was amazed by the result – which looked pretty much like the original we had chosen to paint. Super fun afternoon with excellent step-by-step guidance."

Diana
„I was fully absorbed by the imagination of the artist’s world and experienced a nice drive and flow and could hardly stop painting when the event was over.”

Matti
"The three hours of painting with Pati were pure fun. Great alternative to going out for spending nice time with friends. It's such a fun to interprate the famous paintings and give them piece of your soul! I am definetely gonna do it again.”

Klaudia
"The course was great: 3 hours diving into the world of colors and finally a result that can be seen. I'd love to come back!”